Once a rundown rail yard in Downtown Vancouver, Yaletown has been converted over the past several years into Vancouver’s trendiest and most upscale neighbourhood. Ideally located on the edges of False Creek., Yaletown Vancouver proudly boasts a convenient variety of restaurants, boutiques, galleries, cafes, local designers, modern furniture stores, and even housing and loft style office spaces, making it a preferred residence for young urban professionals. Well known to the area are the Roundhouse Community Centre and Urban Fare, an upscale grocery store. This area has been expanded since the 1980’s, with its boundaries now being South of Robson Street, West of Cambie Street, East of Richards Street and North of the beautiful False Creek.

Yaletown has retained its red brick charm, and is known for unique architecture and mixed-use loft style character. The contrast of renewed heritage buildings and their modern surroundings is a special feature of the area. Everything from loft apartments to modern tower condominiums are available. The seawall offers a place for joggers, cyclists, rollerbladers, and dog-lovers alike to enjoy the Vancouver’s waterfront. The walk exhibits beautiful landscape, lighting, and parks such as the George Wainborn park.

At the bottom of Davie Street, you will find a marina which harbours many yachts and floating homes. Also available is the “Aqua Bus” available to the public which connects Granville Island, Stamps Landing, and Science World. 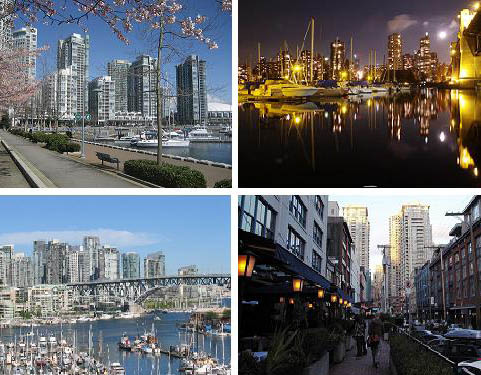