Gastown is known distinctively for its historic background and is the birthplace of Vancouver. This area was established the same year Canada became a nation, and is founded by Jack Deighton, also known as “Gassy Jack” who opened a saloon in the area in the 1800’s. (This nickname was acquired because of his tendency to exaggerate stories and talk non-stop.) Throughout its history, Gastown has been subject to periods of growth, neglect, and rebirth.

Gastown is well known for its mixture of both old and new, and is a place often visited by many tourists. It contains both down-home and upscale, and is inhabited by both residential and office workers. This area is rich with boutiques, restaurants, and night life. It is becoming home to more and more residents as its development continues.

Distinctive attractions of Gastown include the famous Steam Clock, the Vancouver Lookout at Harbour Centre, and the two of the oldest buildings: The Europe Hotel and The Landing, which are now stores.  Plenty of new development has taken place within heritage brick buildings, creating new style art inspired homes and lofts.  Gastown has plenty of foot traffic and tourist highlights. 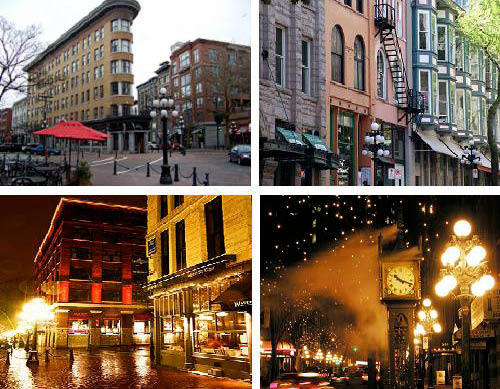